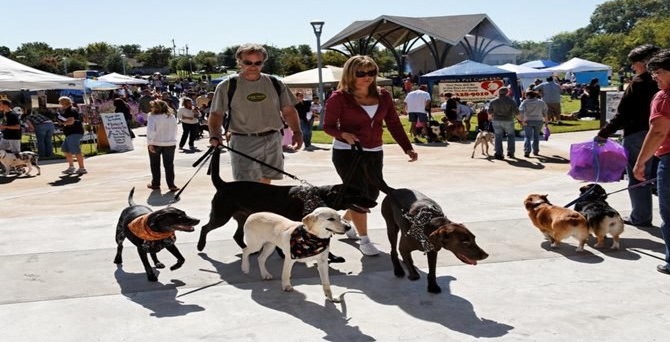 If there is one thing about the North Texas Lifestyle it is that we LOVE OUR PETS…. from dogs and cats to horses and pot belly pigs. While some residential areas have restrictive covenants regarding the breed of animal, the majority of HOA’s and other communities are very pet friendly.

We love our dogs so much we have restaurants and stores that are dog friendly to parades for dogs! And you can find ‘Dog Parks’ everywhere!  We have listed a few below.

If you’re thinking of adding a new furry family member, we want you to always think adoption first. We have provided a list of adoption centers for your convenience. Fostering a pet is a great idea to see if you want a dog long term. Also please consider adopting an elderly pet, they often get overlooked. Good luck searching for your Fur-Ever friend!

The place to see and be sniffed in Deep Ellum is Bark Park Central. Located under an overpass within view of downtown, the park is a favorite of urban dwellers and offers a break from the concrete jungle. There are no human restrooms on-site, so plan accordingly.

A 5-acre area located within Gateway Park in Fort Worth, Fort Woof is a pup’s paradise. The dog park is open until 11:30 pm and has night lighting, water fountains, benches and disposal bags at the ready. It has garnered national attention: it was named the best dog park in the nation by Dog Fancy magazine in 2006, and it was listed among the top 5 by Pedigree in 2008.

As part of the Irving Animal Care Campus, Irving Dog Park has the luxury of rotating play areas, which gives each dog run a recovery period. There is human seating available, as well as a combination dog/owner water fountain. Separate fenced-in areas for small and large dogs help keep the peace, and large rocks sprinkled throughout the park give people a front-row seat to watch the pups play. The Irving Dog Park boasts the earliest and latest hours of all the dog parks: 5 am-midnight.

North Bark Park is the Cadillac of canine recreation. In addition to 5 acres of grassy, fenced-in play areas, there is a walking trail and pond. If your pup gets dirty, and that’s pretty much guaranteed, take advantage of the stand-up wash stations. For the humans, the park has four picnic tables, pavilion, observation deck, restrooms and ample parking. There is no night lighting at North Bark, so the park closes at dusk. 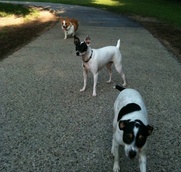 Wagging Tail is a 5-acre park low on frills and high on nature. There’s plenty for the pups to do, though, with fenced-in areas for large and small dogs as well as a trail that runs along the park’s perimeter. The park is open from sunrise to sunset and also offers human restroom facilities.

White Rock Lake Dog Park was the first designated off-leash dog park in Dallas. The park opened in 2001 and has been growing ever since. In addition to typical dog park amenities, this park has lake access. Plus it’s lit after dark and stays open until 11 pm.

With a name like Wiggly Field, discerning dog owners may be worried this park is just a flash in the food bowl. But fear not: Wiggly Field packs a punch in the form of 3 acres of park, scores of trails and a nearby pond. The park is open from sunrise to sunset.

Have something to add to the list? Let us know.

More Patios in The Dallas & Burbs for Pets