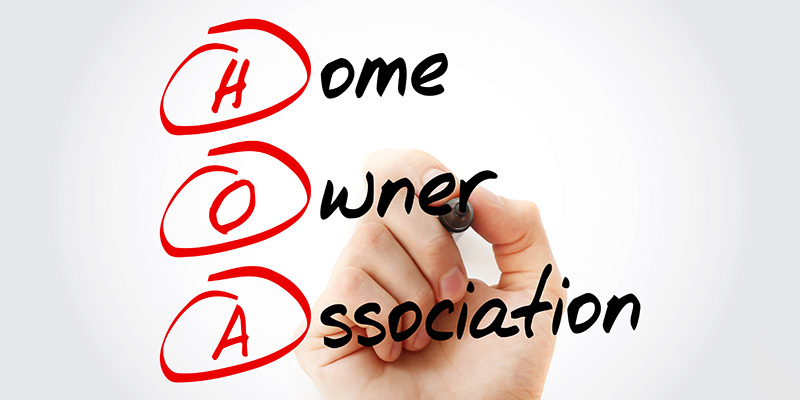 HOA laws are changing in Texas.  Don’t worry, as your Realtor we are on top of these changes and excited that the Realtor community is hard at work for their clients.

These new laws went into effect on September 1st, 2021.  As your Real Estate Expert we are here to guide you and educate you through these changes.  The new REALTOR supported laws will bring more balance between property owners and the property owners associations.

The number of people living in HOA run communities is constantly on the rise and expected to rise more as more communities are being built to meet the needs for our growing population.

Remember that HOA is set in place to help keep the value of your home and the community with set rules and regulations.

So what’s changing?  Take a look below and know we are ALWAYS here to assist and answer any questions or concerns you may have. 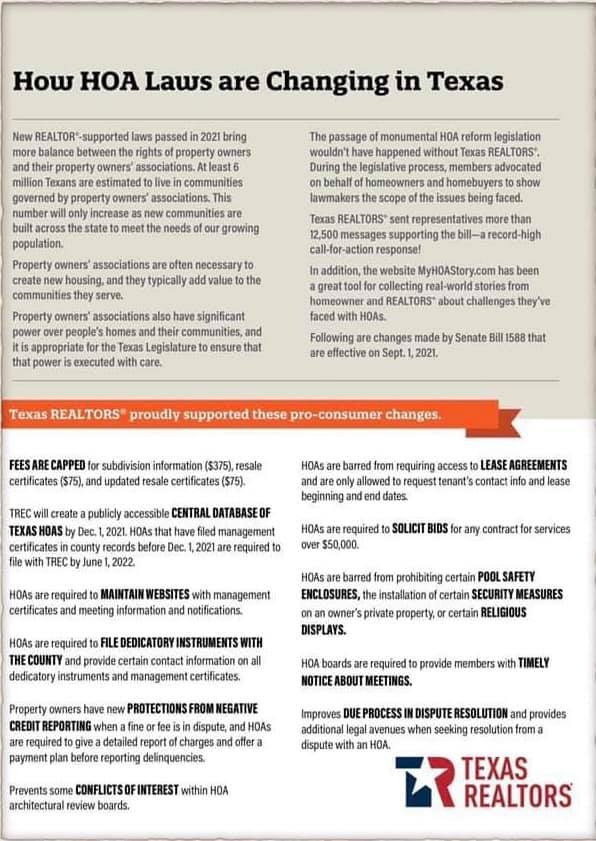 What Is a Homeowner Association (HOA)?

A homeowner’s association (HOA) is an organization in a subdivision, planned community, or condominium building that makes and enforces rules for the properties and its residents. Those who purchase property within an HOA’s jurisdiction automatically become members and are required to pay dues, known as HOA fees. Some associations can be very restrictive about what members can do with their properties.

Homeowner associations (HOAs) are usually formed within communities or neighborhoods of single-family homes or multiple-unit buildings (such as condominiums). An HOA is typically established to make and enforce rules regarding the properties within the jurisdiction. An HOA is comprised of–and run by–the community’s residents. Membership in an HOA is usually a requirement to buy a home within a community where an HOA has been established.

An HOA usually has a board of directors or governors that are elected to enforce and oversee the HOA’s rules and regulations. An HOA will typically describe its rules in a document called a Declaration of Covenants, Conditions, and Restrictions (CC&Rs). CC&Rs set certain conditions for owners about the maintenance of their properties.1 These conditions sometimes include structural restrictions–the type of fences or landscape allowed–or more minor aesthetic choices, such as the color of paint on a house. A CC&R document may also outline the penalties for violating the guidelines set forth in the CC&R. The penalties range from fees to forced compliance or in some cases, even litigation.

Most HOAs are incorporated, and, thus, are subject to state laws. However, some states consider condominium-based HOAs, often called “condominium communities,” and organizations governing cooperatives—called co-op boards—to be distinct entities from HOAs. This distinction is made on the basis of the assumption that the property interests of these organizations differ. As a result, the designation “community association” serves as a broader, umbrella term that encompasses HOAs, condominium communities, and co-op boards.

An HOA is distinct from a property owners association (POA). A POA is a more broad term that usually refers to a group of people who want to better their community and the real estate values of the property in their community. The main difference between POAs and HOAs is that POAs may include anyone in the community with an interest in the value of the community’s real estate; so, unlike HOAs, POAs may include individuals who are not homeowners.

Advantages and Disadvantages of Homeowner Associations

Typically, the HOA management will provide additional services for its members in exchange for their HOA fees. These amenities may include landscaping, parking lots, and facilities like swimming pools, tennis courts, or party spaces available for all the HOA members. Some HOA fees also cover the cost of trash collection and snow removal.

On a more theoretical level, for some people, HOAs are symbolic of self-governance and democracy. This belief may stem from the idea that the best people to manage a community are the people living in it (as opposed to a landlord who doesn’t live on the premises).

One disadvantage of an HOA is the high cost of the association fees, which ultimately could be a deterrent for some prospective buyers. Also, the HOA rules and regulations can seem unreasonable, arbitrary, or too restrictive for some homeowners, who may want the freedom to customize their properties.

In addition, HOA board members are normally volunteers, and they may not be properly trained to manage real estate, deal with complex financial issues, or unite a disparate group of people for a common cause. Because the leadership of HOAs must reach a consensus when they are making decisions about maintenance and upgrades, it is also possible that there may be conflicts amongst HOA members who disagree.

In some cases, HOAs can wield significant financial and legal power over the property owners in their zone. HOAs collect monthly or annual HOA fees. HOA fees are typically between $200 to $400 per month, but they can range anywhere from less than $100 to upwards of $10,000 in luxury neighborhoods or communities.

HOA fees also often contribute to the association’s reserve fund, which is set aside for major renovation projects or emergency use. In addition to regular fees, HOAs can also impose special assessments on homeowners when the association lacks sufficient reserves to pay for unexpected repairs on common areas, such as sidewalks or parking lots.

The HOA’s board, which is usually responsible for the organization’s finances, oversees the collection and management of funds. Along with setting dues and assessments, the board can slap fines on homeowners who break the rules or damage the common areas. In addition to imposing penalties, HOAs can also place a lien on a property if a homeowner falls seriously behind on their dues. Existing HOA liens can make it difficult to sell the home unless they are cleared.

Example of a Homeowner Association

Sometimes, conflicts related to HOAs make the national headlines. Beginning in 2014, an Indianapolis homeowner and his HOA entered into a dispute over the solar panels on the roof of his home. To fully capture the sun’s energy, the solar panels need to face south—a direction the HOA won’t allow, saying they are too visible to the street and other neighbors.

While the language in the HOA covenant permits solar panels, it is vague on the subject of their positioning. With the support of several state legislators, the homeowner tried to get a bill passed by the Indiana General Assembly that would prohibit HOAs from restricting solar panels or their placement in any way.

What is a homeowner association (HOA)?

A homeowner association (HOA) is an organization tasked with governing the affairs of a real estate development owned by multiple parties, such as an apartment building. HOAs are responsible for tasks such as ensuring the building is regularly maintained, deciding on whether to pursue larger renovation projects such as replacing the building’s room, and drafting and enforcing the building’s bylaws. In order to fund its operations, HOAs charge their members monthly HOA fees, typically in the range of $200 to $400 per month. HOAs also have the authority to enforce the community’s bylaws, such as by imposing fines on residents who refuse to comply.

What are the pros and cons of belonging to an HOA?

HOAs can benefit individual owners by providing necessary management services. For example, without an HOA the owners of an apartment building would need to coordinate among themselves to decide on common problems such as building-wide garbage removal, building repairs, and community policies. This could be very time-consuming for residents and could result in conflicts and disagreements between owners. On the other hand, HOAs can also create problems for owners to the extent that the owner disagrees with the HOA’s community bylaws or spending decisions.

What legal powers does an HOA have?

Individual HOAs will have different levels of legal powers, depending on how they were designed. However, generally speaking HOAs will have the legal authority to create and enforce community policies, such as whether smoking, pets, or rentals are allowed in the building. Also, HOAs will decide on budgets for the building and will have the authority to charge monthly or one-time fees to their members. If a member refuses to pay these fees or to comply with the community policies, HOAs can impose a range of penalties. In many cases, these penalties can include monetary fines, the restriction of community privileges, and even litigation.

Do you have any other questions regarding HOA’s?